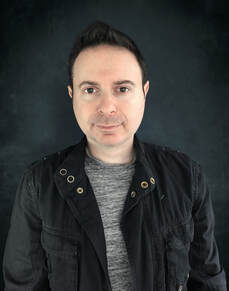 Dan studied photography and graphic design and worked in computer graphics before pursuing his passion for cinema and a full time career in film.  He directed his first short FINDERS, KEEPERS while living in the Big Apple and studying at the New York Film Academy.   This Hitchcockian film-noir picked up numerous awards and was warmly received at international festivals.

He has written several feature specs for the US and UK and has been commissioned for writing assignments and novel adaptations including ELLA by Uri Gellar, DRIVEN by Andrea Badenoch and FILTH by Irvine Welsh.

Dan sold his teen horror LONG TIME DEAD to Working Title Films which released it through Universal starring Lukas Haas, Marsha Thomason and Alec Newman.  His horror spec DO OR DIE sold to Michael Kuhn’s Qwerty Films and made the “Brit List”.

Dan has just completed his third short film ALL THAT GLITTERS starring Sophia Myles and Alec Newman, and is developing several film and television projects for the US and UK with various producers and through his production company Buckle Up Entertainment including psychological sci-fi thriller I-SELF from his original screenplay to direct as his debut feature.

Favorite Films: North By Northwest, Rear Window, The Apartment, Some Like It Hot, Seven, Reservoir Dogs